The federal hydropower dams on the Columbia Snake River System have helped to win wars, build industries and make a better life for millions of people. Hydropower typically provides three-quarters of the electricity used in the Northwest.  Hydropower is the nation’s leading renewable energy source, and is one of the lowest cost and most environmentally friendly sources of power in the world.

Clean, renewable hydropower plays a significant role in Pacific Northwest power production, and allows Northwest residents and businesses to enjoy lower power bills and half the carbon footprint of other regions in the nation.   As conservation, biomass, cogeneration, geothermal, wind, coal and nuclear power are all being called upon to meet the growing needs of the region, hydropower remains the most efficient, clean and renewable energy source.

It would take 2 nuclear, 3 coal-fired, or 6 gas-fired power plants to replace the average annual power produced by the four Snake River dams. Additionally, a 2015 Bonneville Power Administration analysis showed that the cost to replace the power the Snake River dams produce would be $264-350 million annually at current market prices.  This range is due to the variability of the power usage.  In years of few extreme weather event and few power emergencies, replacement costs are lower. 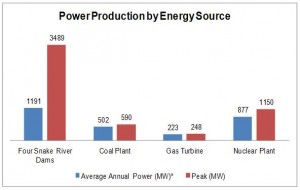 Hydropower is clean, renewable and does not produce greenhouse gasses or other air pollutants. Hydropower generates carbon-free electricity, and helps our country to avoid burning fossil fuels, which would release an amount of carbon dioxide equal to the annual exhaust of 62.2 million passenger cars, or half of the cars on the U.S. roads.

Hydropower can respond to emergency power needs because it can be turned on and off quickly.  Other forms of electricity production, such as coal or gas power plants require a great deal of time to start or stop producing electricity.  And solar or wind power may not be available when it is needed. Water from rivers is a purely domestic resource that cannot be interrupted by foreign suppliers, production strikes or transportation issues. 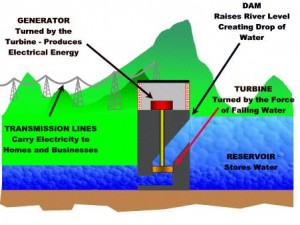 BPA Factsheet on power benefits of the Snake River Dams